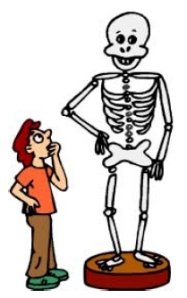 Students test bone density using plastic snack bags, corn puff cereal and a heavy book. They apply the scientific method to determine degrees of bone loss and learn why healthy bones are important in space and on Earth.

Following this activity, the student will be able to

This activity may be spread out over a two- or three-day period. You maywish to use the first day for discussion and baggie preparation, and the second and third days for experimentation, data collection, and discussion.

ASSET, a science and curriculum institute for high school science teachers, offers an interactive and content-rich program, with presentations by leading astrobiology researchers from the SETI Institute, NASA, and California Academy of Sciences. Participants will receive the Voyages Through Time curriculum (http://www.voyagesthroughtime.org/). All expenses are covered through grant funds. Two person teams or single person applications will be accepted. For more information and to register, visit http://www.seti.org/seti-educators/asset.

The National Ecological Observatory Network (NEON) is offering a new online course for educators focused on its successful science program – PB-501 Project BudBurst: Introduction to Plant Phenology and Climate Change. This course is free to K-12 educators and is suited for both formal and informal educational settings. This online course provides all needed information to implement Project BudBurst in the classroom and engage your students in a national program by learning more about plants and climate change at a local level. Participants will be provided with detailed information on Project BudBurst and how to participate, including instructions on how to select plants and make observations, suggestions for structuring the classroom involvement, and classroom activities to engage students in making observations and analyzing data, as well as forming a community with other K-12 educators within Project BudBurst.

Participants in this course can sign up for optional graduate level continuing education credits from Colorado School of Mines. The fee for two credits is $90. For more information and to apply, please visit http://neoninc.org/budburst/academy/.

The National Aeronautics and Space Administration (NASA) has extended the proposal due date for NASA Research Announcement (NRA) NNH11ZTT002N, entitled “Research Opportunities in Space Biology.” The deadline for receipt of proposals has changed from Friday, January 6, 2012 to Monday, January 23, 2012, 5 PM ET. Selections of proposals are expected to be announced by April 30, 2012.

The full text of the solicitation is available on the NASA Research Opportunities homepage at http://nspires.nasaprs.com under menu listing “Open Solicitations.” Potential applicants are urged to access this site well in advance of the proposal due date to familiarize themselves with its structure and to register in the NSPIRES system. Proposals must be submitted electronically.

As part of a series of electronic professional development experiences for educators, the NASA Explorer Schools project and the National Science Teachers Association are hosting a 90-minute live professional development Web seminar for educators on Oct. 5, 2011, at 6:30 p.m. EDT. The student activity featured in this seminar will introduce grades 5-8 students to the exciting world of astrobiology. The seminar will review criteria for determining if something is alive — or not alive — and apply those criteria to determine if anything is living in any of three different soil samples. This type of analysis is similar to what the Viking landers used on Mars when looking for life.

For more information and to register online, visit http://learningcenter.nsta.org/products/symposia_seminars/NES2/webseminar12.aspx .

The National Aeronautics and Space Administration (NASA) has released NASA Research Announcement (NRA) NNH11ZTT002N, entitled “Research Opportunities in Space Biology.” This NASA Research Announcement (NRA) solicits hypothesis-driven research proposals for both ground-based experiments and flight experiments in Space Biology (SB). All proposals must describe hypothesis-driven experiments that will answer basic questions about how cells, plants and animals respond to changes in gravity. Proposals for ground-based experiments must demonstrate and describe a clear path to hypothesis testing in space flight experiments on the ISS or other appropriate space flight platforms. This NRA also requests proposals for rapid turn-around flight research using plants or Petri dish-based biological systems that will utilize either the Advanced Biological Research System (ABRS) hardware residing on the International Space Station (ISS) or the Biological Research in Canisters – Petri Dish Fixation Unit (BRIC-PDFU) hardware on any of several potential flight platforms (based on science requirements and availability).

The full text of the solicitation is available on the NASA Research Opportunities homepage at http://nspires.nasaprs.com under menu listing “Open Solicitations.” Potential applicants are urged to access this site well in advance of the proposal due date to familiarize themselves with its structure and to register in the NSPIRES system. Proposals must be submitted electronically.

Proposers can use either NSPIRES (see URL above) or Grants.gov (http://www.grants.gov ) for proposal submission.

Every organization that intends to submit a proposal in response to this NRA must be registered with NSPIRES, and such registration must identify the authorized organizational representative(s) who will submit the electronic proposal. Instructions on how to register in NSPIRES is described in the NRA. Each electronic proposal system places requirements on the registration of principal investigators and other participants (e.g. co-investigators). Questions in regards to responding to this NRA may be addressed to the contacts referenced in the full solicitation document.

This is a broad agency announcement as specified in FAR 6.102 (d)(2).
Notwithstanding the posting of this opportunity at FedBizOpps.gov, nspires.nasaprs.com, or Grants.gov, NASA reserves the right to determine the appropriate award instrument for each proposal selected pursuant to this announcement.

The Project
Presently, there is a growing interest in the biogeography of microorganisms. By looking at the genetic differences from isolates of similar microbes from across the globe, researchers are currently trying to understand the degree to which populations of microbes are isolated and whether this isolation suggests an allopatric speciation model for prokaryotes. We propose to conduct a citizen science pilot study of microbial diversity in water heaters to both:
1. access the feasibility of basing a citizen science project on field microbiology, and
2. generate a first image of the biogeographic distribution of thermophilic microorganisms across the United States.

Recruiting
We are currently recruiting two to three households from each state. Participants will perform a series of steps to acquire a water sample from their kitchen tap and answer about 20 questions. The entire process will take about 30 minutes. We ask that participants be non-science households with children. Friends, colleagues, or neighbors are potential samplers. Please help us identify households in your state. Thank you!

Participate
If you know of a household who would like to participate, please fill out our simple web form at https://paspacegrant.wufoo.com/forms/psarc-citizen-science-project/

The NSBRI’s Postdoctoral Fellowship Program provides support for Postdoctoral Fellows in any U.S. laboratory carrying out space-related biomedical or biotechnological research. The program is open to U.S. citizens, permanent residents, or persons with pre-existing visas obtained through their sponsoring institutions that permit postdoctoral training for the project’s duration. Funding is for a two-year period with an option for a third year of support.

For detailed information on the application process, visit http://www.nsbri.org/Announcements/rfa09-01.html

OSGC maintains a diverse array of programs to support space science and engineering and aims to help develop a strong science, mathematics, and technology education base at all educational levels. Our blog is designed for easy access to both educators and the general public. We hope that you will find the site useful. You may also want to visit our primary website for more information regarding many of the programs administered by the Oregon Space Grant Consortium.